3 Ways to Wear a Maroon Cardigan 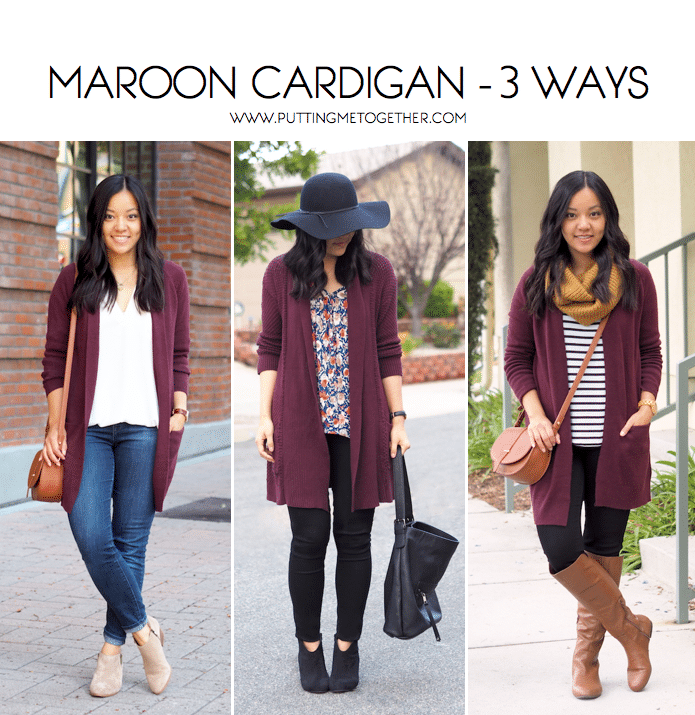 Last year I bought a maroon cardigan during the Nordstrom Anniversary sale (middle pic above), but ughhhhh that thing had issues.  The knit was really loose and kept snagging, so I had to ditch it.  I was soooo glad that during this year’s NSale back in July another better maroon cardigan was available!
Maroon is one of my staple colors for the fall, so it was about time that I got a maroon cardigan.  I love having it to liven up my neutrals without being bright.  I often pair it with black, but also with grey or navy.  For colors, I love pairing it with blush and mustard.  Burnt orange would be really cute too.
I did 3 different casual looks with this cardigan to give you some ideas! 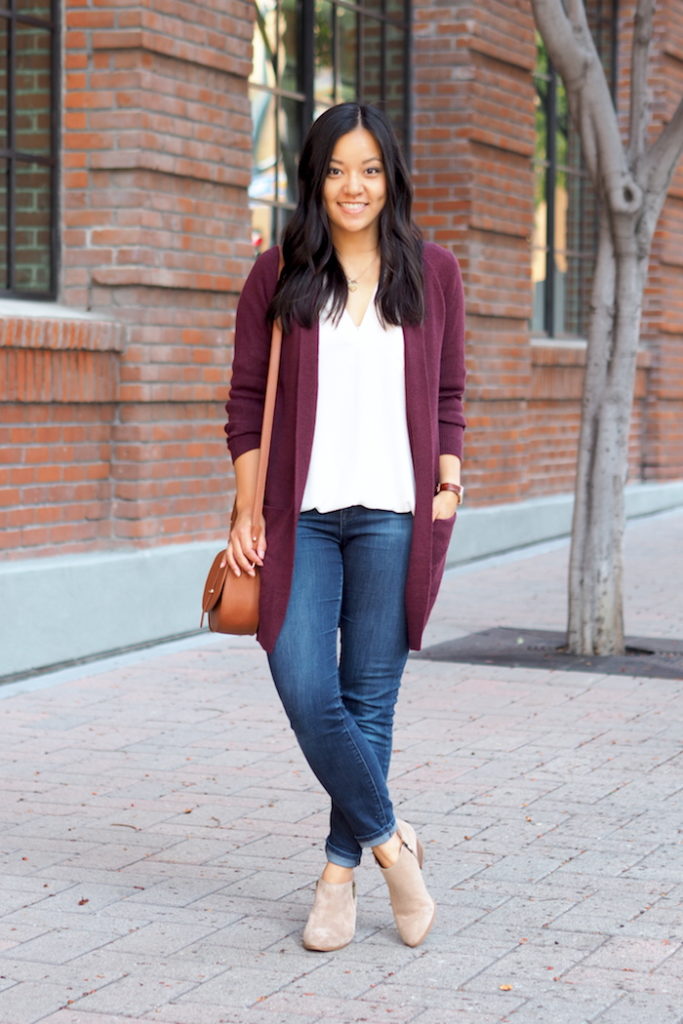 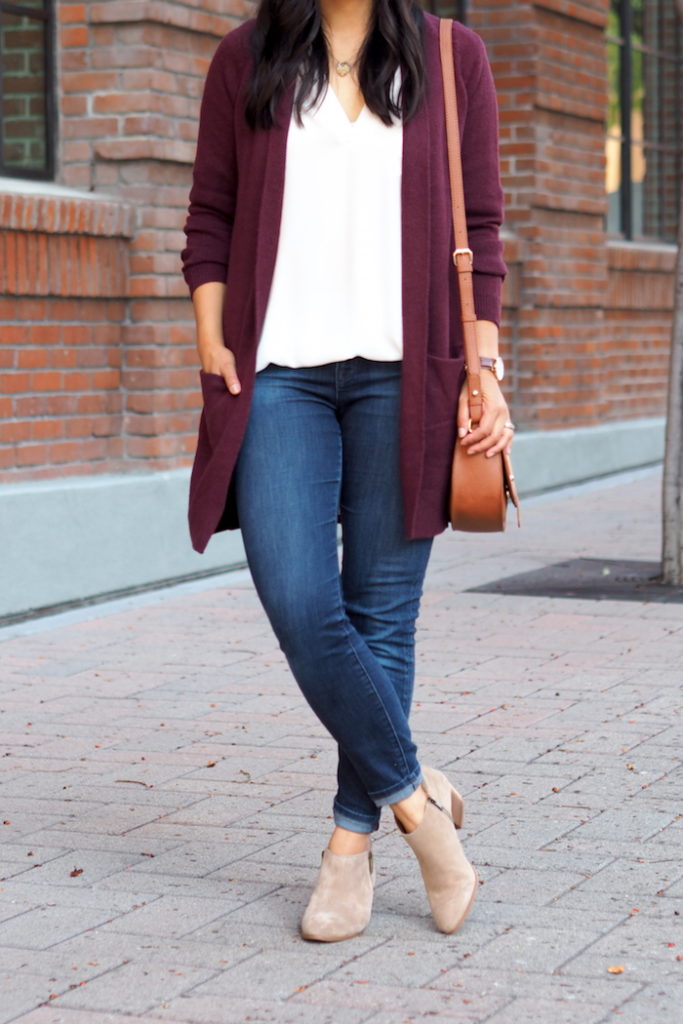 1.  Denim + Lighter Neutrals
I often pair maroon with black, so I love that this outfit incorporates lighter neutrals like white, taupe, and tan. 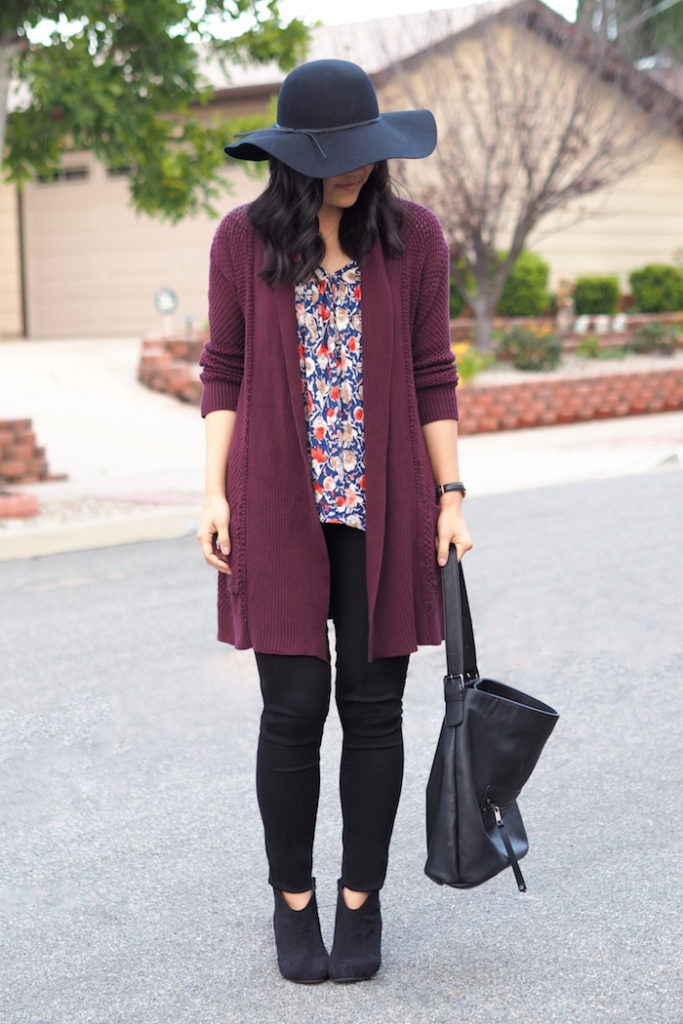 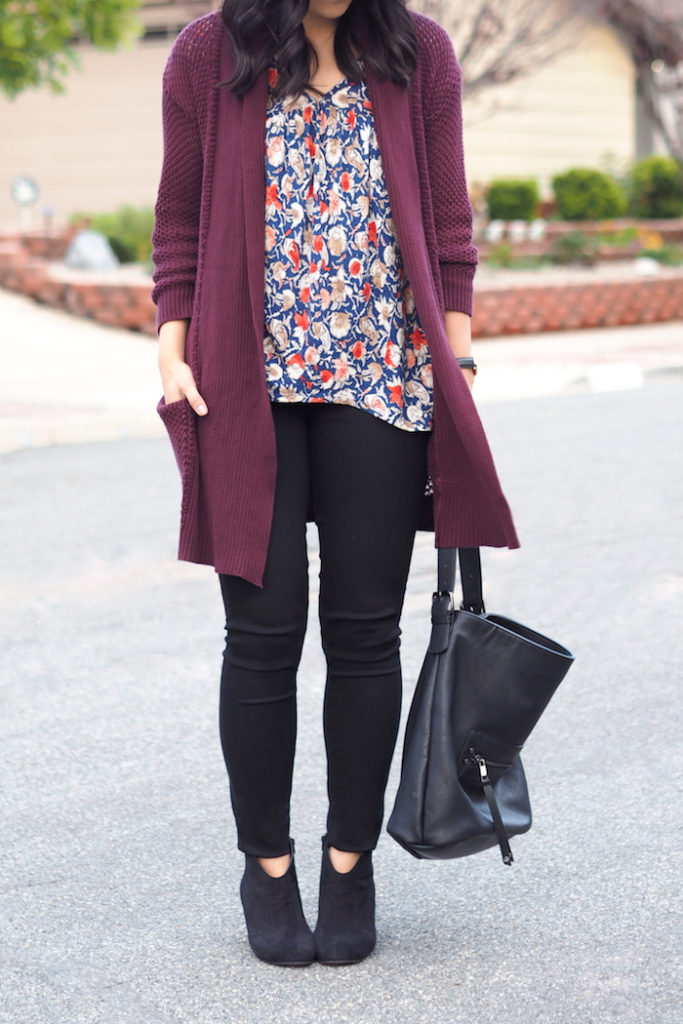 Another thing I like to do (specifically with my maroon jeans) is to pair maroon with a navy PRINTED top.  While I like maroon with navy, I don’t usually love how maroon looks with a solid block of navy.  However, a printed top helps break up blocks of color and works really well!  (A couple examples with maroon jeans HERE and HERE.)
Shop for the Look:
Top: Nordstrom (similar, similar, exact–sold out)
Cardigan: Nordstrom (similar)
Jeans: Zappos (exact, exact)
Shoes: Kohl’s
Bag: c/o Sole Society (similar–sale for $24!)
Watch: c/o Daniel Wellington (exact)
Hat: Nordstrom (similar) 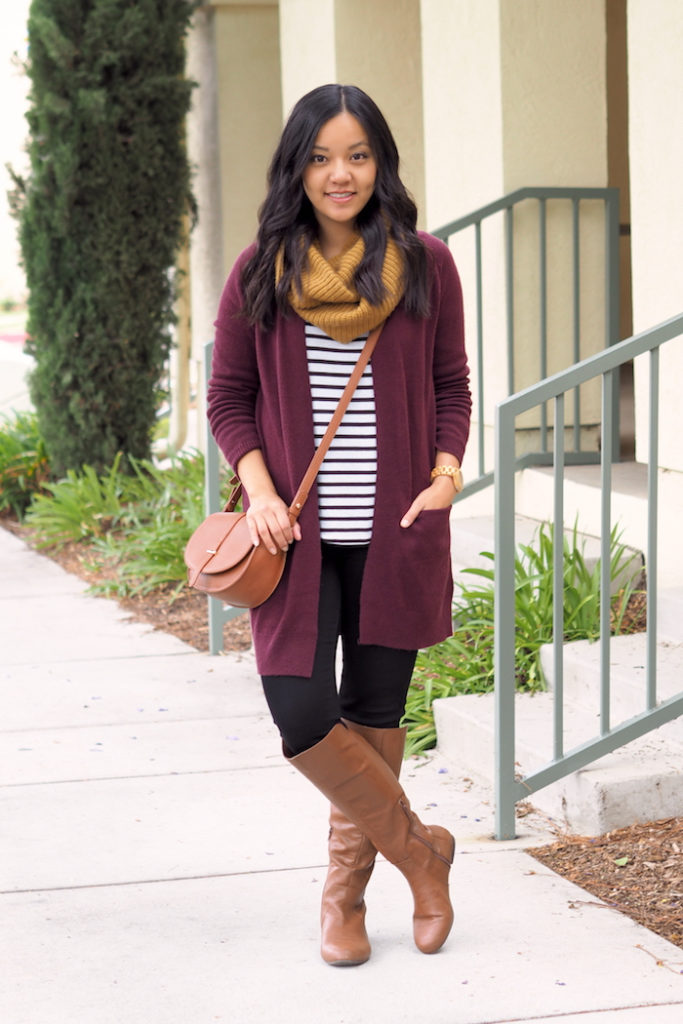 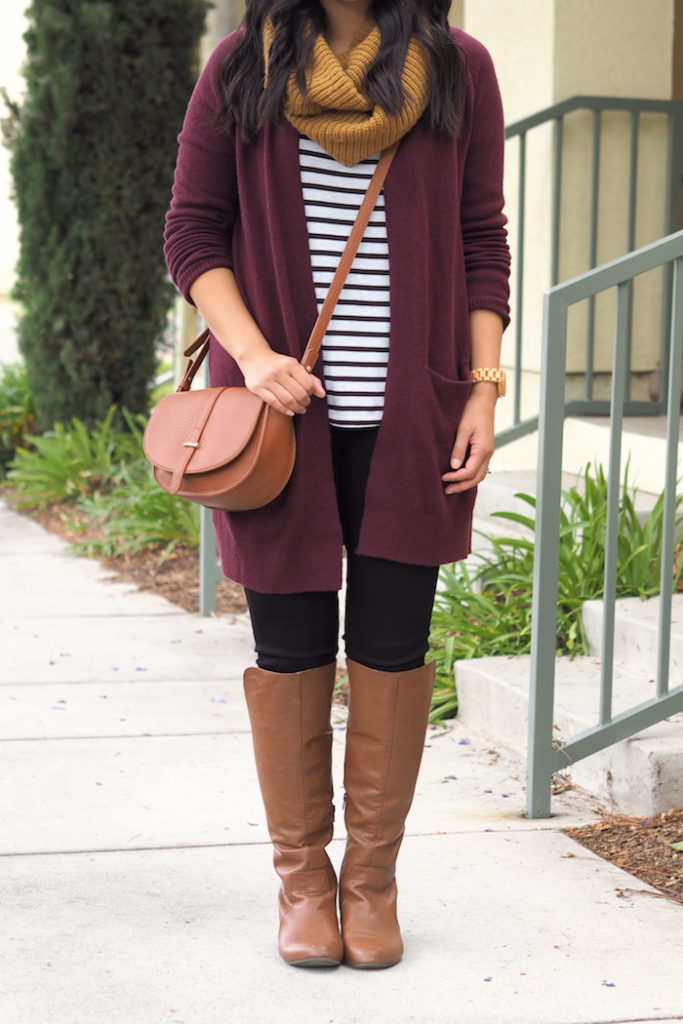 3.  Pop of Color + Mix of Neutrals
Here’s an example of maroon plus mustard.  While streamlining the neutrals would have worked too, for some reason if I add another color I like a mix of neutrals.  An example of blush with this maroon cardigan would be HERE from Instagram.
Shop for the Look:
Tee: H&M (similar)
Cardigan: Nordstrom (similar, similar)
Jeans: Zappos (exact, exact)
Boots: Famous Footwear (very similar–this year’s version)
Bag: Nordstrom (similar, exact sold out)
Scarf: ModCloth (almost exact)


The one I got in July from this year’s NSale was recently sold out, BUT a new almost identical version is now available!  (Find HERE.)  The one I own and the new one appear identical, and they are from the same brand and have the same name.  But from the info on the product page it seems they are made of different material.  (You can compare the old HERE with the new HERE.)

Here are a few more, all under $50.  One is from Nordstrom and the rest are Old Navy or Target. 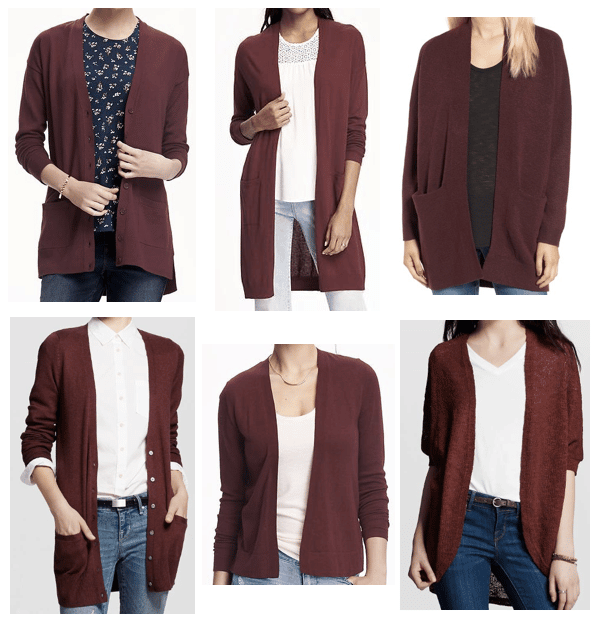 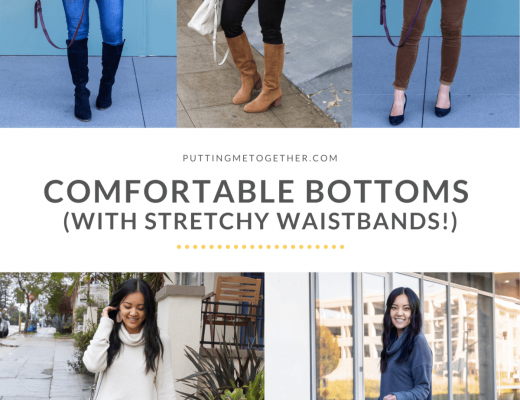 Comfortable Bottoms for Thanksgiving That Look Stylish and Put Together 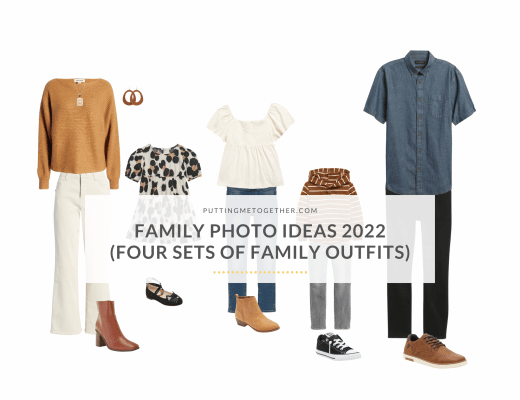 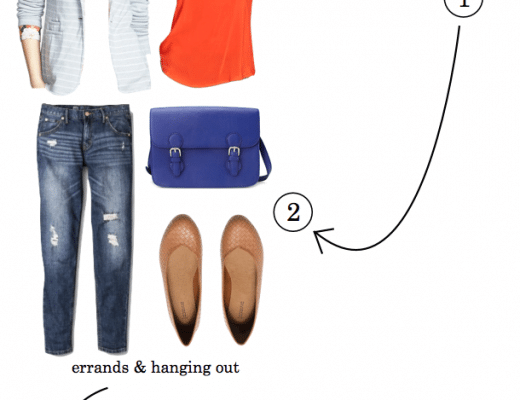