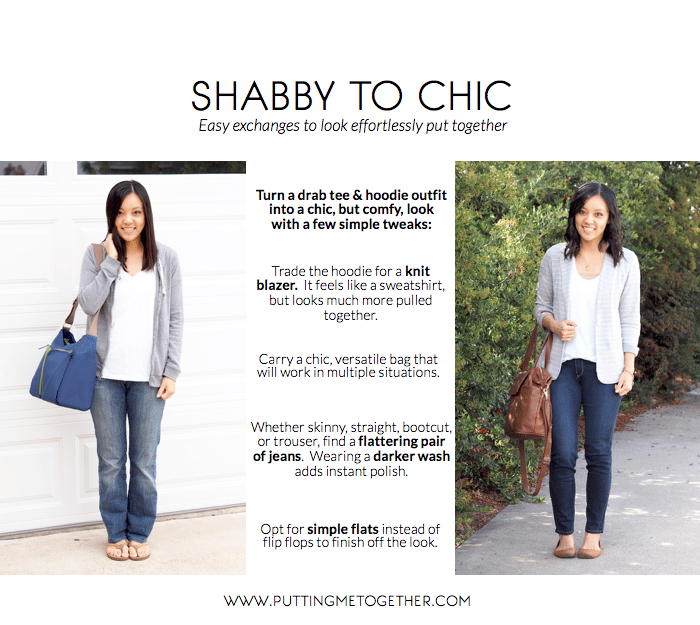 Surely you’ve heard me profess my love for knit blazers, right?  No?  Or perhaps you forgot?  Ever since I got this knit blazer last year I’ve thought about how this is exactly like wearing a grey hoodie but so much better.  It feels like a sweatshirt, but in fact, it’s even more comfortable because it’s fitted so I’m not carrying extra fabric that drags me down.
One of my favorite things to talk about on this blog is how to take boring, drab outfits and turn them into a put together look with easy changes.  Like, how adding one accessory can totally pull together an outfit.  Or long, long ago when I posted”Shabby to Chic – Buying the Right Pieces to Look Effortlessly Put Together.”
And while I’ve mentioned the knit blazer vs. grey hoodie thing before, today I’m finally showing it.  ANNNND, if you like these posts you’re in for an even bigger treat because today is actually just a preview of a bigger upcoming post with a handful of examples just like this!  But, shhh, don’t tell anyone.  😉

How similar are the pieces above?  SO similar, but so different, right?!  Plain tee, grey sweatshirt-y thing (that’s the technical term, btw), jeans, neutral flat shoes, and a bag.  But, if you are used to dressing like the picture on the left you can make small and simple adjustments to have a more pulled together look! 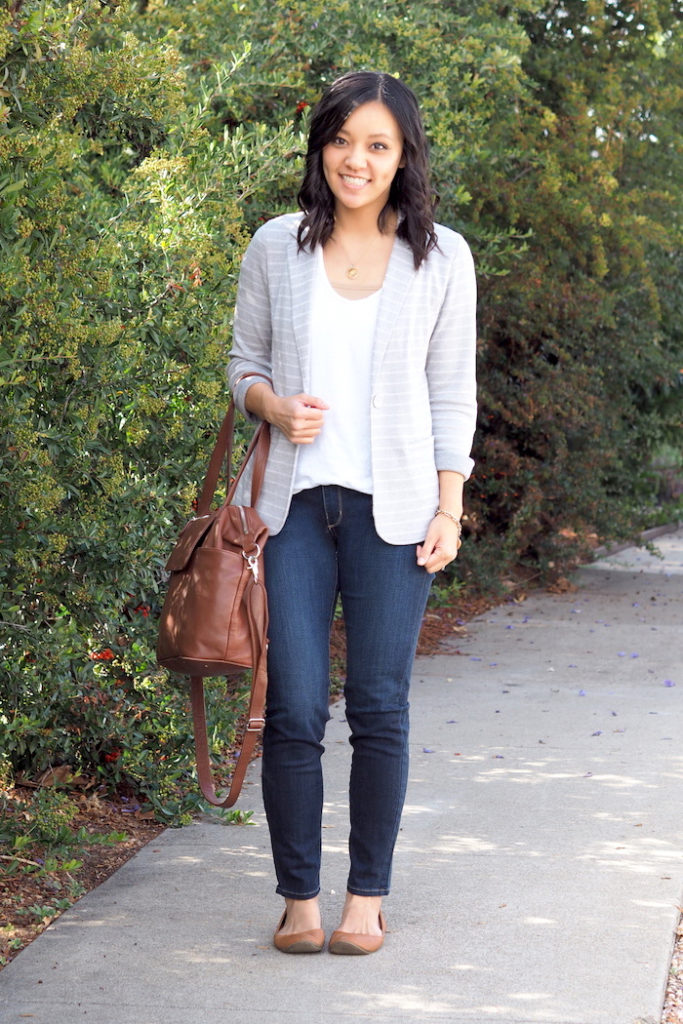 Seriously people.  This blazer is a total cheat.  In the most awesome way, though!  Some people are worried about blazers with broader shoulders or due to upper arms, but this particular one has no shoulder pads and should lay flat on any shoulders.  It’s stretchy too–really, really like a sweatshirt. 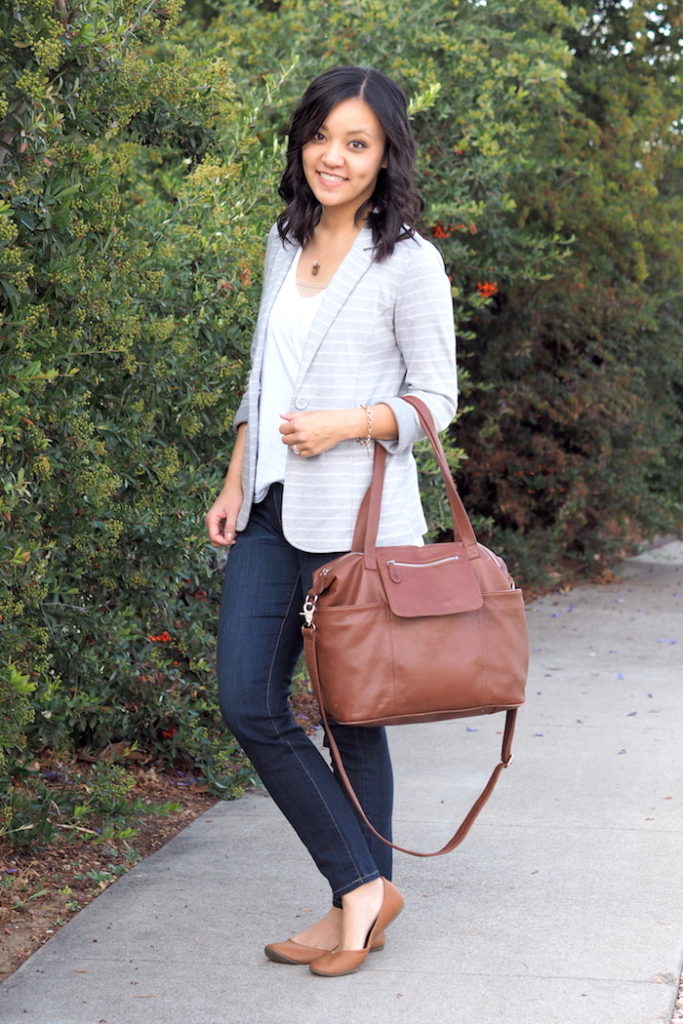 These are my super cheap Target flats that I wear more often than you all probably care for.  (See the ways HERE.)  They’re not necessarily stylish, but they look a whole heck of a lot better than flip flops and go with almost anything.  When I have no idea what shoe to wear or just want to run out the door without thinking about shoes, I slip these on.  Eaaaaaaaasy. 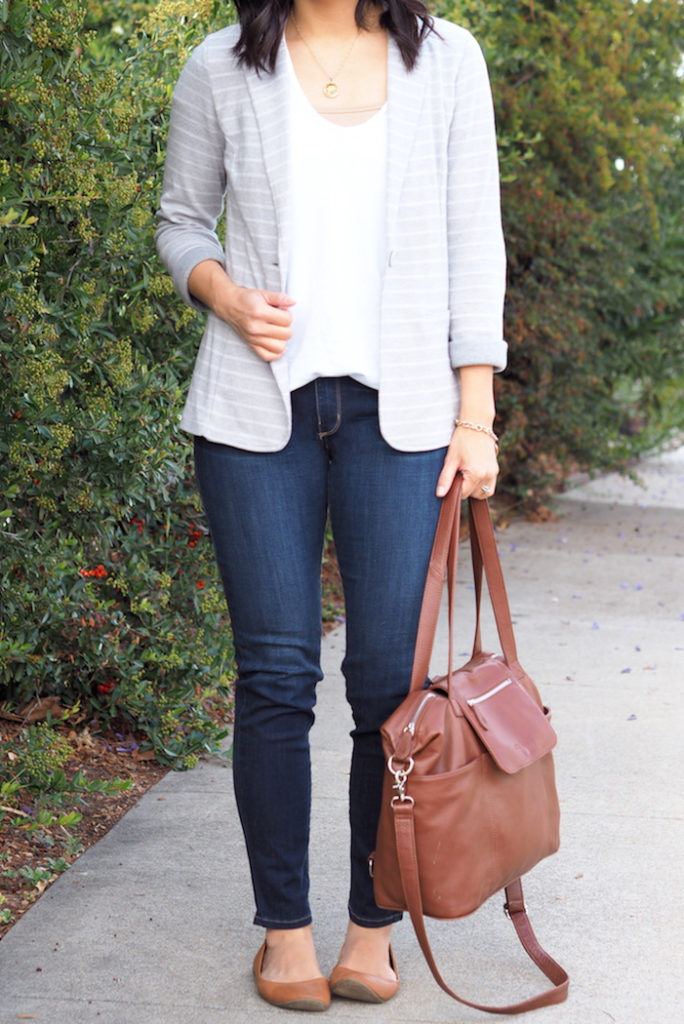 And I’m barely wearing any jewelry!  How simple is this?  Getting the right pieces makes it super easy to get dressed!
Here are a bunch of blazers, all of which are knit or ponte and should feel like sweatshirts, at least to varying degrees.  (I haven’t personally felt all of them though, so read their item descriptions!)  My exact blazer is no longer in stores, but a seemingly similar one of the same brand is HERE in 8 colors and in petite sizes.  It’s a little more expensive than the rest, though.  (I got mine during Nordstrom’s sale last year.)
The rest are mostly from Target and JCPenney. 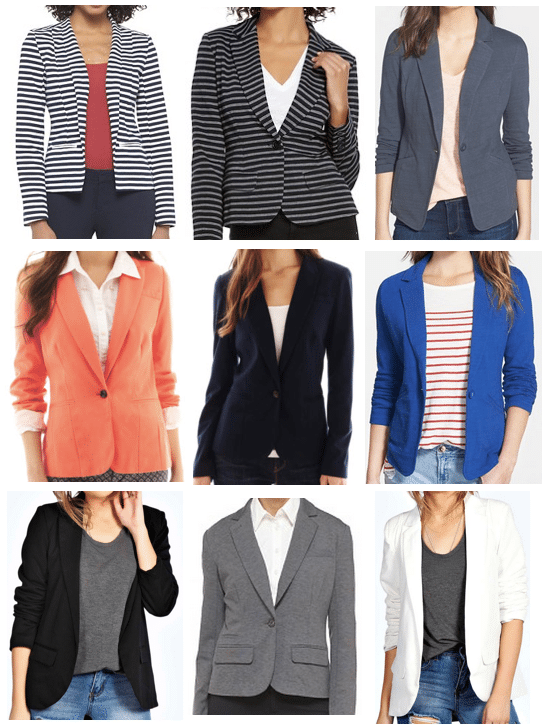 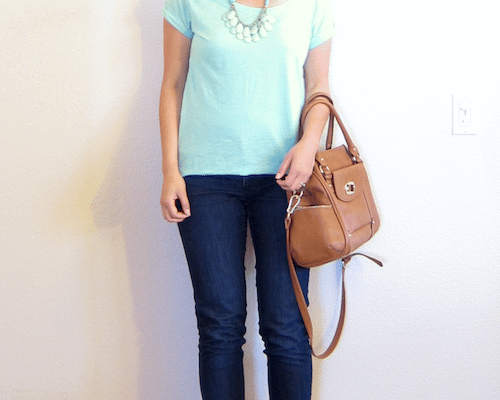 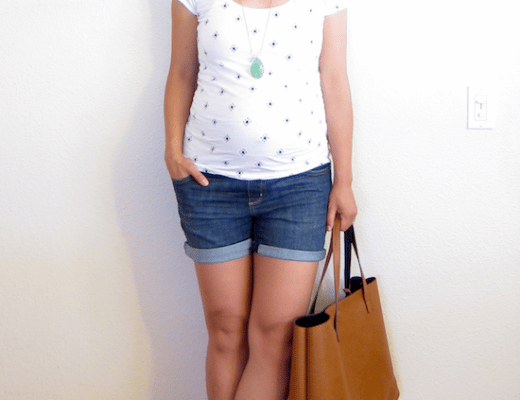 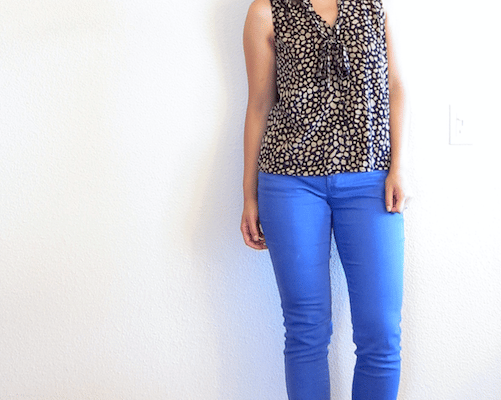