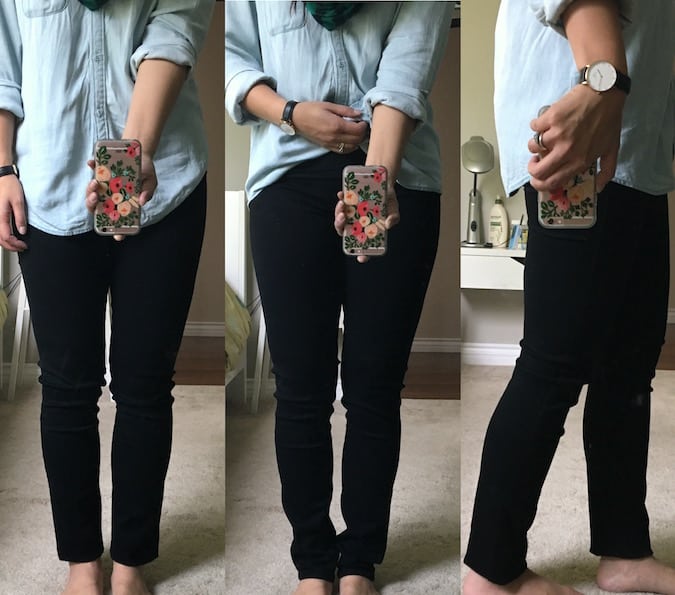 My last shopping review post was over 2 months ago (see them all HERE), but I finally unleashed the beast and have quite a few reviews for today!  Most of my shopping was for items I’d like to replace, though I tried a few others as well.  Spoiler alert: I didn’t keep most of these, though there are a few gems that I’m keeping.

Black Skinny Jeans
My black LOFT jeans have served me well, but they have unfortunately faded.  They were my first *real* pair of black jeans and I didn’t know how to take care of them.  (Before that was a $9 pair from Forever 21 that I bought just to see if I even liked black jeans.  Those died real quick, no surprise.)  I don’t mind the fading so much and it’s actually grown on me.  It looks more casual which is mostly fine, except if I ever need black jeans to dress things up a bit.  The second problem is that I’m looking for more fitted ankles than they provide.  If they weren’t faded I would really consider tailoring the ankles to make them skinnier.  But since they’re faded also, I decided to use some store credit from Shopbop and Zappos to explore black designer jeans.

I initially tried a black pair of Lucky Brand jeans since I love my dark wash Lucky jeans, but the black ones were too big overall.  Then, since I also love my Paige skinnies, I moved onto those.

Paige Skinny Skyline – size 29
First up is the Paige Skinny Skyline.  Zappos says the leg opening is 10″, which is the same as my Lucky Brand jeans.  However, Nordstrom says (HERE) the leg opening is 11″ which I found to be more accurate.  (I think it’s because Zappos measured from size 26 while Nordstrom measured from size 29.)

In the first picture I rolled the jeans up inward, but you can see in the second picture that they are pretty long on me otherwise.  The bigger problem was that the leg opening is the same as my current black jeans, less fitted around the ankles.

They are INCREDIBLY soft and stretchy.  Reviewers said they could be mistaken for leggings, which I could see.  However, though these jeans are on the thinner side, they are much thicker than leggings for sure.  Plus, they have a real front pocket.  And they don’t lose their shape–hallelujah!  Great, great, great jeans if you don’t want a skinnier ankle. 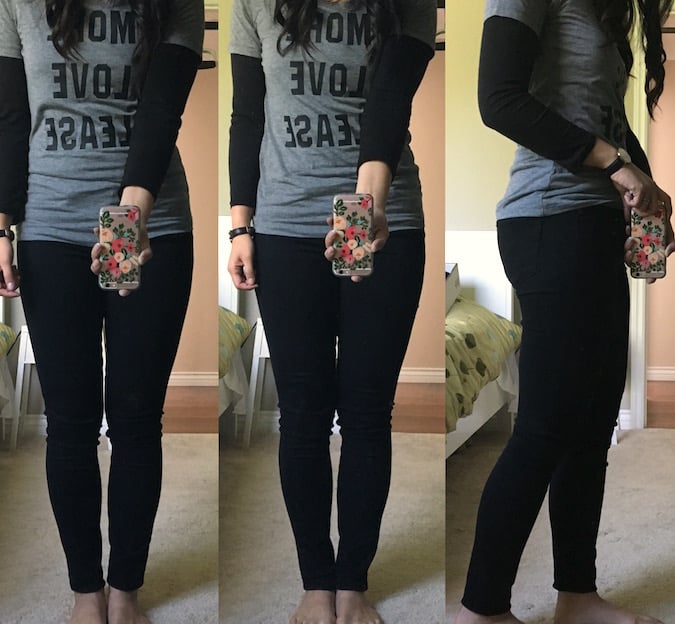 The first pic above is with the bottom of the leg folded up as if it were hemmed.  Second pic is at full length.  (They can also be found at Nordstrom HERE.)

I was worried that I wouldn’t even be able to squeeze into something that was called “Ultra Skinny,”  but it turns out the wonderful amount of stretch is a magical saving grace (*praise hands emoji*).  And, to make things even better, the ankle is what I’d hoped for!

When I initially put them on, they were slightly “squeezy” on the legs, and the seat kept sliding down.  I am NOT a fan of pulling my jeans up all the time, so I was ready to package them up and send them back.  But for some strange reason I wanted to give them a second shot, so the next day I wore them around the house for a while.  What I didn’t expect was that they started to conform to my body–without losing their shape–and the seat thing was no longer a problem!  Again, some magic saving grace there, man.  These things are pretty freaking awesome!

The only thing keeping me from pulling the tag off is that I want to try a couple of Levi’s first–a pair of 710s (THESE) and 311s (THESE).  I’ve heard great things about Levi’s, and they are much, much cheaper than Paige denim.  I ordered those yesterday and can’t wait to try them! 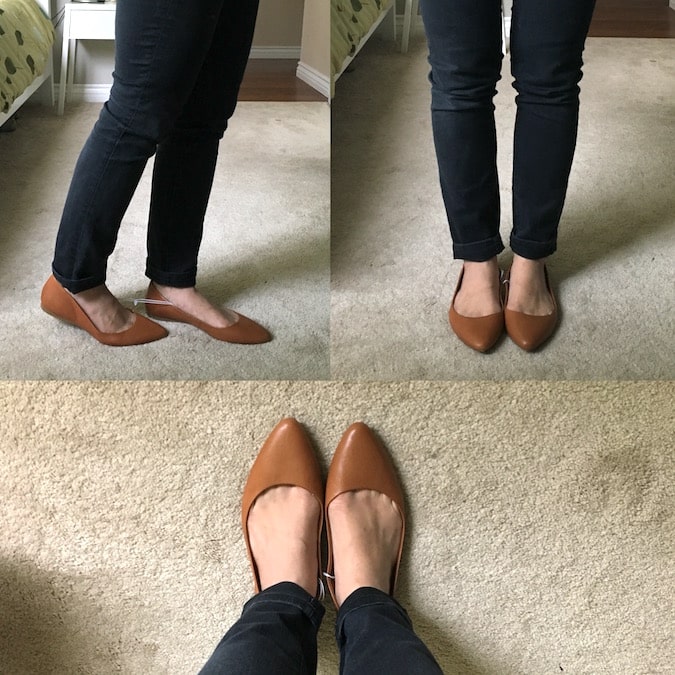 Tan Pointed Toe Flats – size 9
Target used to be my go-to for shoes, but over the last year (year and a half?  I don’t really know…) I’ve moved away from them and looking to take better care of my feet and body.

However, I think there ARE some decently comfortable Target shoes and wanted to give these a shot.  The design aesthetic is exactly what I was looking for–perfect color, pointed but not extremely pointed, simple, and sleek.  But ahhhhhh if they were just softer!  The part above my toes felt stiff, and while mayyyyybbeee they would have broken in…how can you tell if they would have?  I didn’t want to take my chances.

Some of you might not have that problem, so these still might be worth trying.  They also come in a pretty bordeaux, or black, or grey. 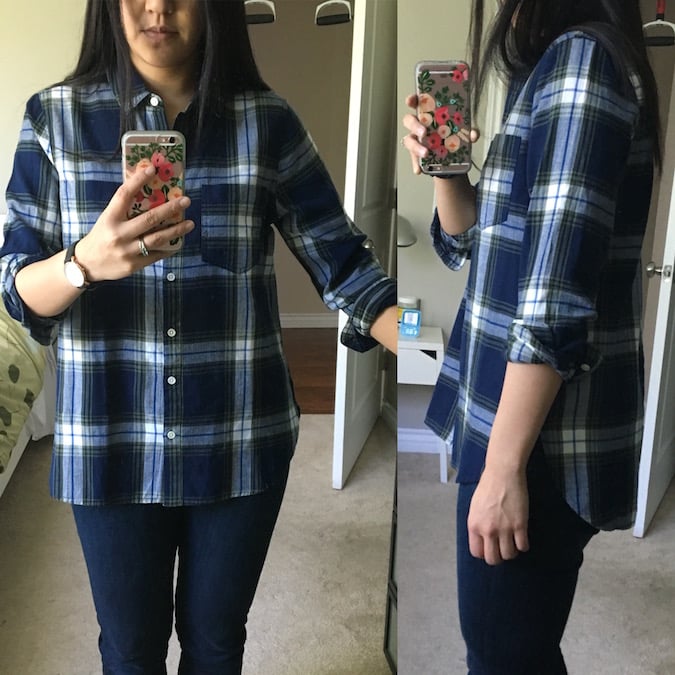 Navy and Green Plaid Old Navy – Medium
I’ve been looking for a navy/green plaid shirt.  Pros: pretty soft, has structure, material is sturdier rather than ton the thinner side.  Cons: too muted for what I’m looking for, and pretty boxy on me and looks rather masculine.  I dunno, reviewers seem to love this shirt, so maybe going down a size would help me.  However, at the end of the day, even if it fit impeccably, the colors aren’t what I’m looking for.  Overall, it feels sturdier than some of those thin shirts Old Navy carries and could be great.  But if you are between sizes I’d recommend sizing down. 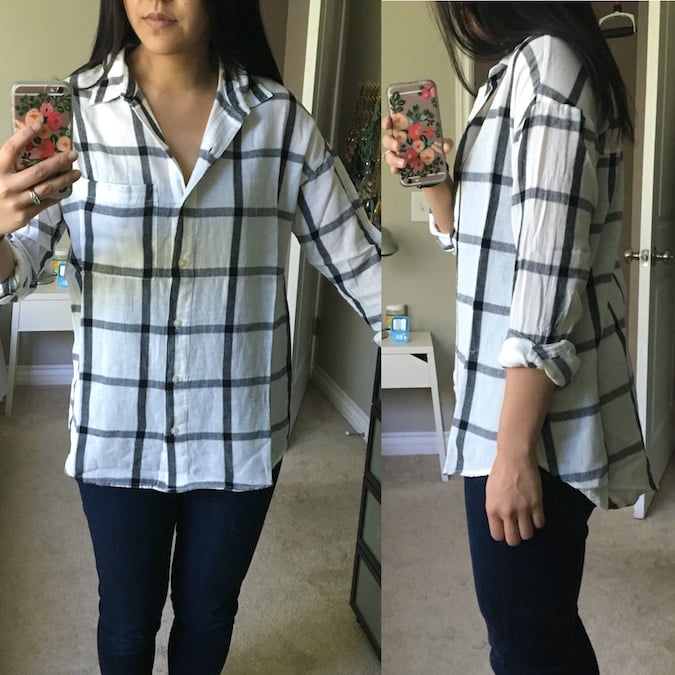 Windowpane Old Navy Shirt – Small
This looks so cute on the model, but not awesome on me!  🙁  It’s more lightweight than the one above, but the bigger problem I had was the drop sleeve.  You can’t see it that well in this picture, but the shoulder seem starts around the top part of your bicep.  Not only that, the fabric around that seam is a little bulky, which accentuates the drop shoulder.  On me, it just looked awkward.  Bummer, because I like the windowpane print! 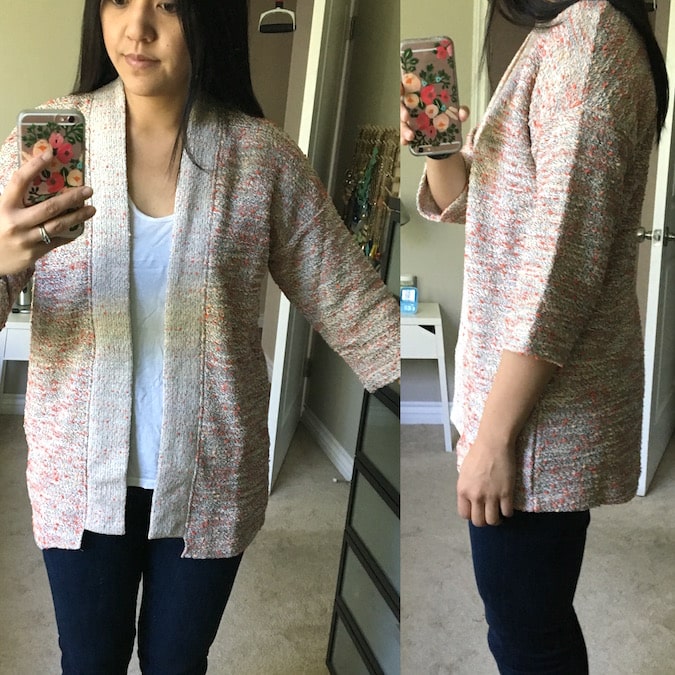 Open Front Sweater – Medium
I’ve been linking to the black version of this sweater, but I’ve been wanting to try it because it looks so cute.  I opted for the red one, since I already have a black/white patterned cardigan.  This one is pretty cute, in either color!  I like how this one brightens things up, especially with spring around the corner, but I think the black and white one is really chic too.

Wearing the Medium fits fine but gives it an oversized cardigan feel, which I don’t think is what it’s supposed to be.  But it could work!  I think a Small would make it much more chic, but casual and comfy at the same time.  Reallyyyy easy to throw this over a plain tee and jeans, and paired with flats, you will instantly look good!

H&M Order
Addie shot up like a weed over the last few weeks, and before we knew it, we were down to only 3 shirts that fit her (and were doing laundry every few days because of it).  I looked at several stores (Target, Old Navy, Marshall’s, you know…) but ended up placing an order at H&M based on stock and prices.  To fill the order and get free shipping I added some of my own stuff to the cart.  Hey, if I have to take one for the team, so be it.  😉 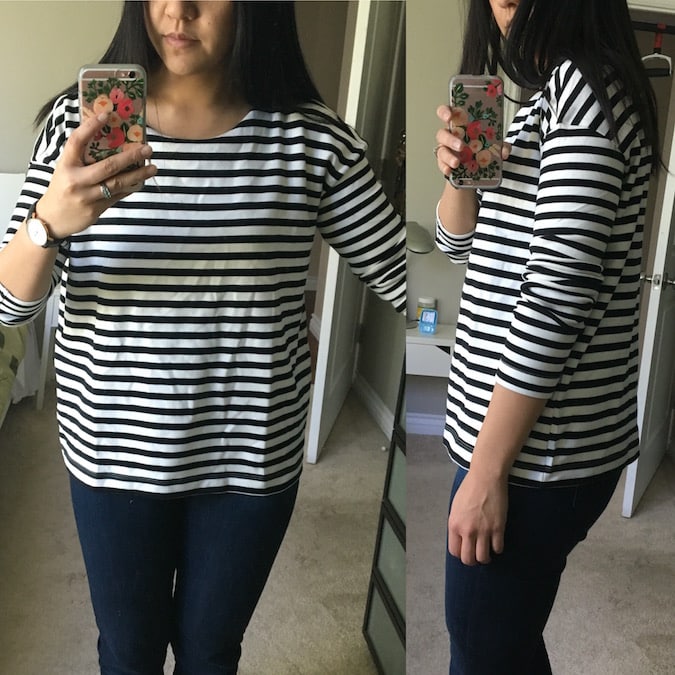 Striped Cotton Top – Medium
First up is this super soft striped top.  I know, I know…another striped top.  While I have several long sleeved striped tops I’ve wanted to replace them for a looser fitting one.  The one I’ve been wearing, which I really like, has a peplum at the bottom (HERE), but I would like one without peplum also.
This one is a thicker jersey cotton–really nice material!  It’s thick, super soft, and super comfy.  I would not hesitate at all to sleep in this thing.  But, aye yai yai, so boxy.  I think a smaller size would fix that problem, though.  I ordered a medium since H&M tends to run small, but that’s not the case for this top.  Kiiiiinnda want one just to sleep in it, but I know that’s not necessary.  🙂
Also comes in red/navy stripe. 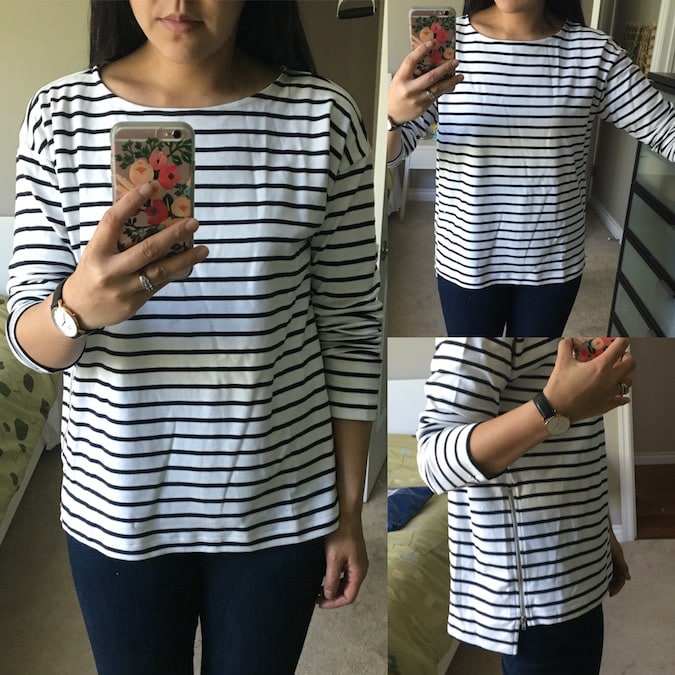 Striped Top with Zipper Sides – Medium
Another super soft top, thicker jersey top with zippered details on the side.  I really like this top and think it fits well if you’re okay with drop shoulders.  It’s cheaper than the one above also, and comes in black base with white stripes.  I could easily be convinced to keep this shirt because it’s so soft, but I’m trying to convince myself otherwise, as it’s thicker than what I was looking for. 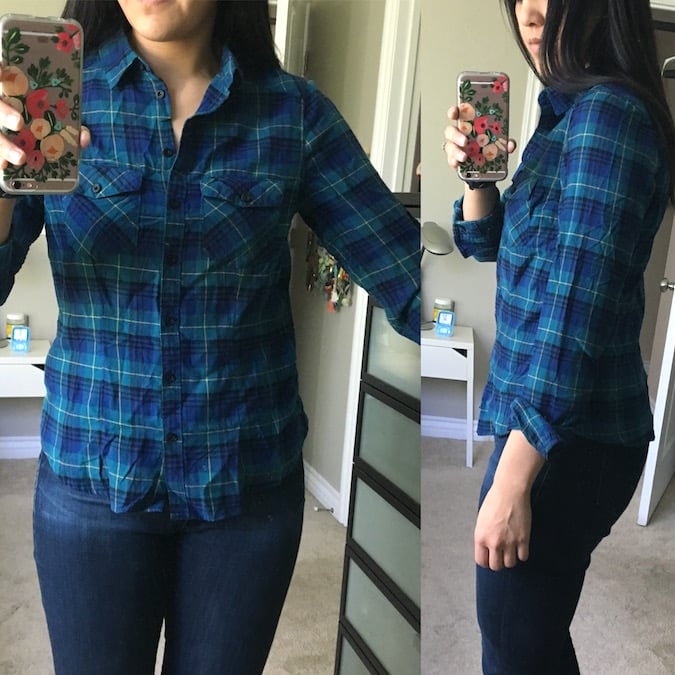 Teal Plaid Button Up – size 8
This fits a little too perfectly and I need to exchange it for a size up.  Besides that, I like these colors much more than the Old Navy one I showed earlier!  It’s really soft and on the thinner side, though not as thin as the J.Crew Factory gingham shirt.  Overall, I think it’s a cute shirt but perhaps not exactly what I’m looking for.

I didn’t see this when I placed this order, but I think I want something with bigger plaid and not the western-looking pockets in the front, like THIS. 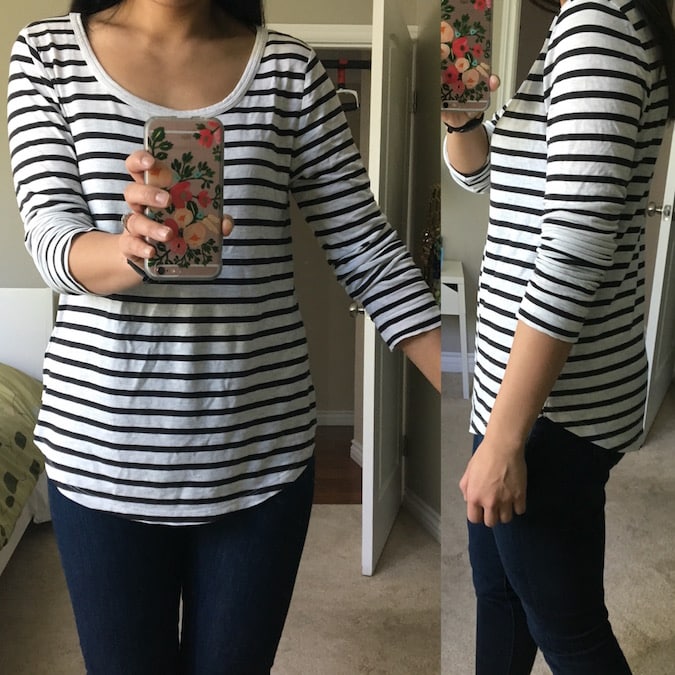 Scoop Neck Jersey Tee – Medium
After all of those sizing misses we just went through, I think I finally nailed it with this one!  We have a winner!  It’s much, much, much thinner than the other striped tees, but also costs less as a result.  It’s more like a tissue-tee and would probably need a cami underneath.  I love how it drapes, and the length is good for peeking out under a sweatshirt or sweater.
One small weird annoyance is that the hem for the sleeves has zero stretch.  I find that really strange and possibly annoying if you want to push up your sleeves and can’t go past a certain point because of the lack of stretch.  As you can see, I could push the sleeve up a fair amount, but just thought it was worth noting.  Keeping it, though!

I had a lot of sizing misses, but I think the Old Navy open front cardigan would be a total hit in the right size!

Coming up next is a very colorful and fun order from ModCloth, and hopefully the Levi’s jeans will have arrived.

Last note: Work is really busy right now, so I won’t be posting next week.  I’ll be on social media as usual, and then back on the blog the following week! 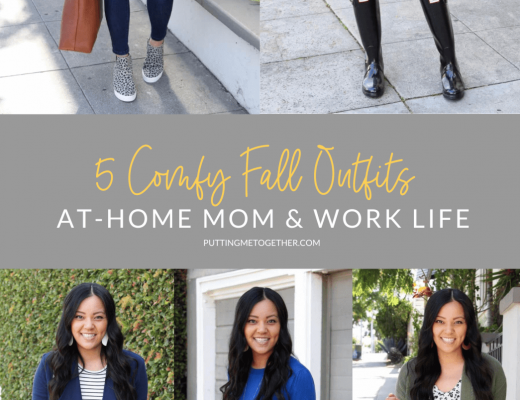 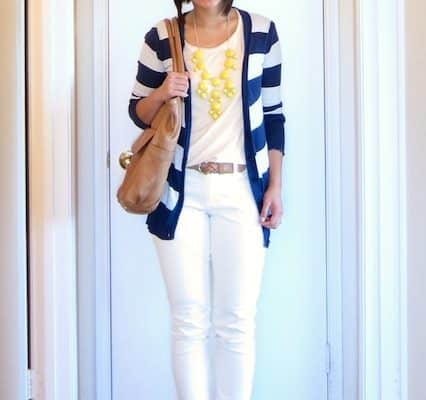