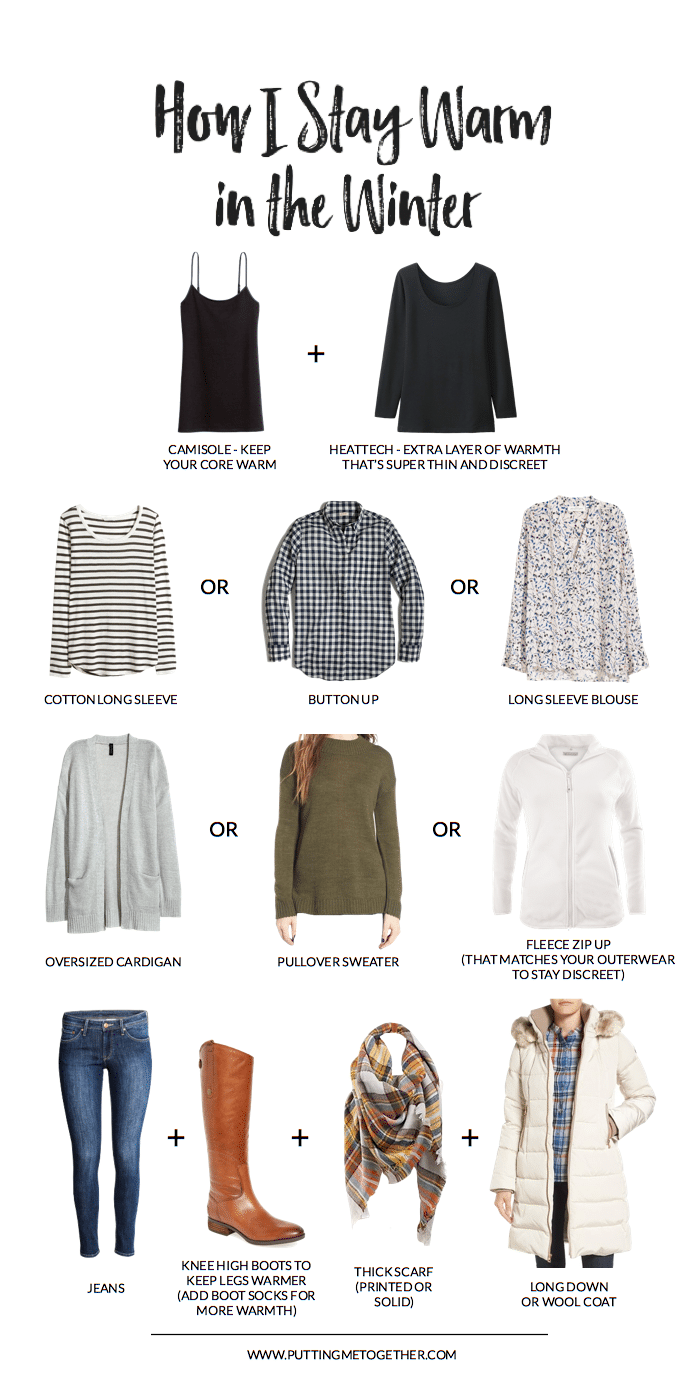 Okay, yall.  I hesitate to write this post because I live in Southern California where winter is a mild 60 degrees during the day and maaaaybe 40 at night when it’s really cold.  But I thought of this post because I’ve had to travel many, many times to Chicago, St. Louis, and Madison (but mostly Chicago) during the dead of winter.  Brrrr!  In Chicago, I’d be with people who lived in New York, Michigan, Minnesota, and Washington DC, and Chicago–all with colder winters than California–and they were always freezing while I wasn’t.  I mean, I was cold, but some of them were really struggling.  (There were also people from Vancouver and Toronto, but they were totally fine!  🙂  )  I started to wonder why I was less affected by the frigid Chicago temps and windchill compared to 5 other people who lived in colder climates–especially because I’m definitely one of those people who “runs cold”!

Like I said, I’m a Californian with little cold to endure so there’s a lot I still have to learn about cold weather dressing.  But as I’ve talked to friends and PMT readers all over the country I’ve realized there are some cold weather dressing tips that are worth sharing in case anyone’s in need of them!  I’ll just share how I dressed that kept me pretty warm, and since I’m sure there are even better ways to go about this, if you’ve got great tips to share, please do!


Also, one note.  I’m not referring to staying warm while playing in the snow or stuff like that.  This is just for day-to-day stuff, going to and from meetings and running errands and that kind of stuff during the winter.

Anyway, basically, I dressed in tons of layers while trying not to look like I was bulked up with layers.  My typical “formula” was: 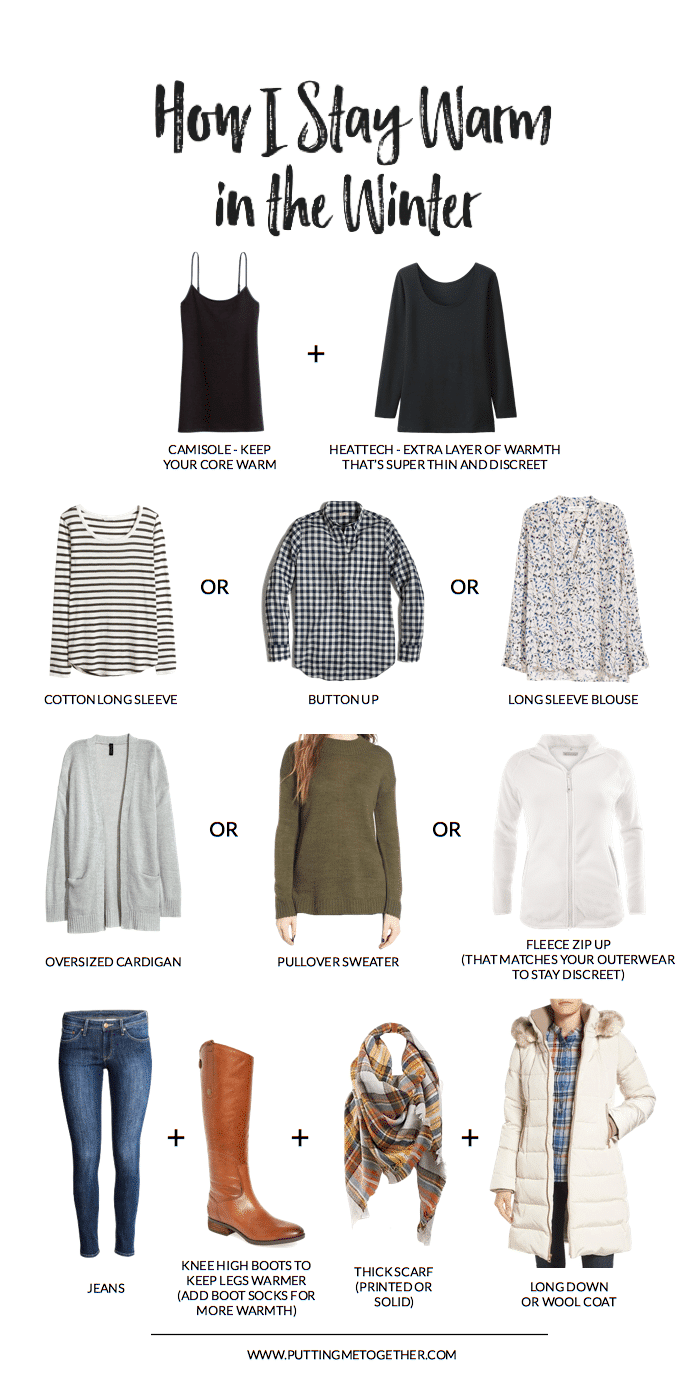 1.  Camisole.  They’re usually thin and help keep my core warm.  Don’t underestimate keeping your core warm!  I just wear cami’s from Old Navy and have been for years.

(I know a lot of you tell me you don’t like these because they make you hot.  If that’s what you’re thinking right now, in the most polite way possible, this entire post might not be for you.  ;P )

2.  UNIQLO HEATTECH.  I’ve talked about these before, but I love these things.  HEATTECH a very thin layer that is soft, smooth, and stretchy, and never loses shape.  They cling to you without squeezing you (unless you get the wrong size), so that you can have an additional layer without bulk. The sleeves are intentionally a little too short so that the layer stays hidden under your shirts or sweaters.  I also get the scoop neckline to stay hidden under open neck tops.  They come in several colors, but I just have nude and black.  For sizing, I’m 6/8 or S/M and get these in M.  Find them HERE.

I hear other women wear Cuddl Duds or things like that, though I’ve never tried them.

3.  Long Sleeve Tee.  Sometimes this would be a cotton long sleeve tee and sometimes it would be a long sleeve or 3/4 sleeve blouse.  Back when I was traveling to Chicago often (falls and winters of 2009 and 2012) the only striped tee I owned was a yellow/grey thermal type one from Target, but it was pretty thin.  If I were to do this formula today, I would wear a black and white striped tee like THIS or other long sleeve tee equivalent, or I would do a blouse.

This layer was important if I peeled off layers once I was inside with blasting heaters.

4.  Cardigan, Sweater, or Fleece Zip Up.  Back in 2009 and 2012, I usually wore a white fleece zip up instead of things like oversized cardigans.  The one I had was from Gap (I still have it!) but it was camouflaged under my white outerwear that you’ll see below.  That helped the whole thing look streamline instead of mismatched or haphazardly thrown together.  My fleece was very plain and more fitted than loose, but white and slightly more fitted.  If I did these layers with my style today, I could substitute a pullover sweater or one of my oversized cardigans for the fleece zip up.  However, I still find fleece is much warmer than a cardigan!  If I were *really* worried about being cold, I would do a pullover sweater AND the fleece zip up.  😀

5.  Down Feather Coat that goes to your thighs or knees.  I WISH the particular coat I have was available today, but it was a random lucky find from Costco in late 2008.  I bought it because I needed a coat for going to Chicago, and it totally works for the occasion.  It keeps me sooo warm, but it is SO thin.  Much thinner than other down coats I’ve tried.  I can roll it up and it only fills 1/4 of my carry on suitcase–it’s amazing!  And, since there was no price tag and no more of these coats in the store, Costco sold it to me for $25.  WHAT?! YES!  #luckyday 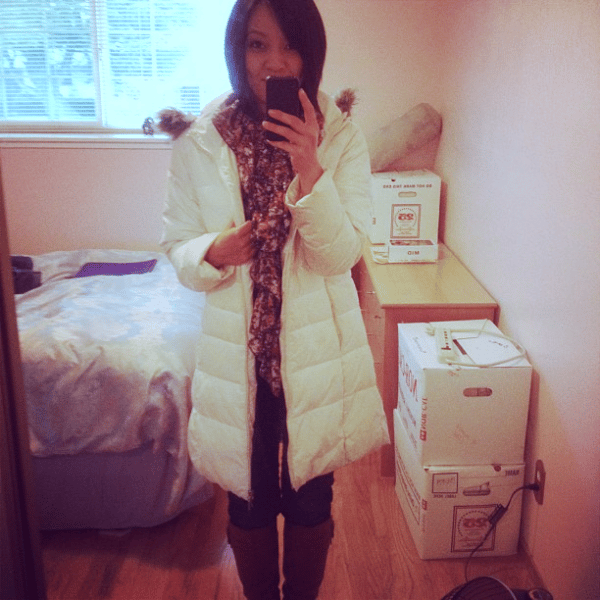 It also almost goes down to my knees, which means that if I’m wearing riding boots to keep my legs warm, the down jacket keeps most of the rest of my body warm.  That extra length is so important!  Several of the other women I spent time in Chicago with only had peacoats or ski jackets that went to their hips, and they were so cold all the time.

6.  Scarf.  A must!  I’m infinitely warmer when I wear a scarf.  The ones I had at the time weren’t even that thick.  If I were to go to Chicago tomorrow I’d bring a blanket scarf.

7.  Riding Boots or Knee High Boots.  Because these cover more of your leg, I find I’m so much warmer in them.  None of the other women I was with in Chicago wore knee high boots.  The one other woman who had a long down coat like mine was from New York, and she wore ankle-height shoes and was always really cold still.  I think I was warmer than her because of the camisole and HEATTECH but also largely due to the riding boots. 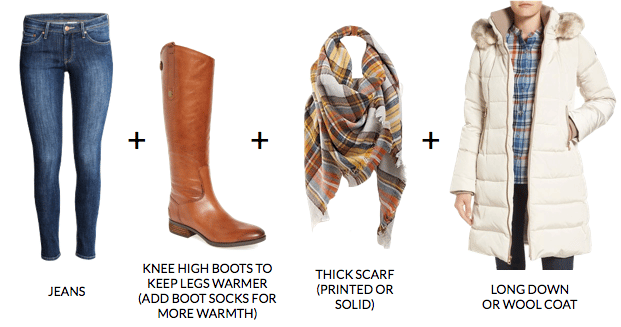 (8.  Gloves and hats.)  Most of the time I could stick may hands in my pockets and be fine, unless we were walking for a long time outside.  But I still made sure I always had gloves in Chicago because we were lugging around music and sound gear made of metal, and OHMIGOSH, grabbing metal with bare hands when it’s been sitting in a trunk in freezing cold is NOT awesome.

I seldom wore a beanie because it made my hair staticky and I didn’t know how to manage that at the time.  However, if I were in even colder weather, like how some of you talk about -10 degree weather (which I can’t even wrap my mind around!) I would definitely wear something to cover my head and/or ears.  Instead, I just used my coat’s hood when necessary.

Those trips to Chicago were actually pretty bearable thanks to all these layers.  And again, I didn’t feel bulky, rather I felt pretty stylish AND pretty warm.  Also, this was extremely helpful for managing the variance in temps from outdoors to extremely heated indoors.  When other people were wearing huge sweaters under their coats yet had no shirt underneath the huge sweaters, they would often be sweating once we got inside.  In contrast, I could peel off layers, down to my long sleeved stripe tee or 3/4 blouse, and be really comfortable in varying temperatures.

Other Tips to Consider


– Clothing Material.  I have THIS navy gingham top from J.Crew Factory, but it is very lightweight and thin.  Contrast that to THIS red flannel plaid from J.Crew Factory which appears similar but is actually much warmer because it’s flannel.  So, if you wanna do a similar navy gingham in the winter, I might go for THIS one instead because it’s flannel.

I don’t know much about other cold weather materials, but if anyone can speak to sweater material like wool versus something else or whatever, please do!

– Fleece Lined Tights.  Sooooo much warmer than regular tights, and it makes wearing dresses and skirts doable in the winter.

– Sweater Dresses.  On the note of dresses, if you want/need to wear dresses but fear that idea in the winter, remember that sweater dresses exist!  For example, I have a knit maroon swing dress similar to THIS (the Old Navy one that feels like pajamas that I’ve been talking about a lot lately), but the material is fairly thin.  Great for all other times of year but not the best for a very cold climate.  However, instead, you could do a dress that looks very similar but is a sweater dress instead, like THIS ONE.  Same look but probably way warmer.

I think that’s all I’ve got for you!  How do you typically dress to stay warm but look cute?  Do you have an additional tip to share?  Favorite layering pieces?  Favorite types of material you’d recommend?

Previous Story
Go-To Combo for Dressing Up Almost Anything + Maroon Dress Back in Stock for $14
Next Story
Instagram Roundup #18 + Olive Sweater is $23! 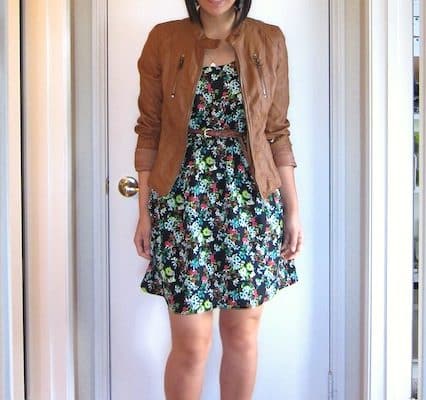 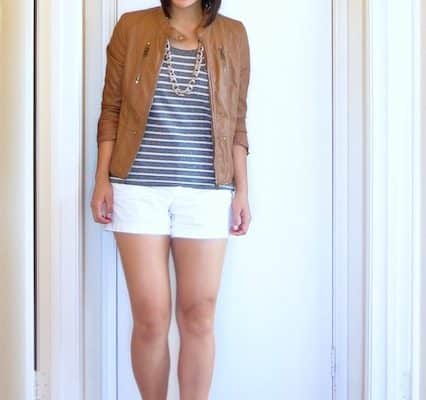 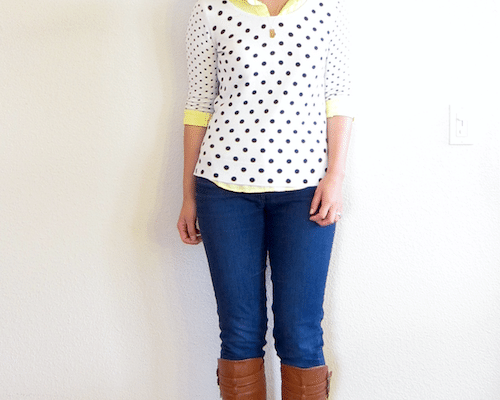